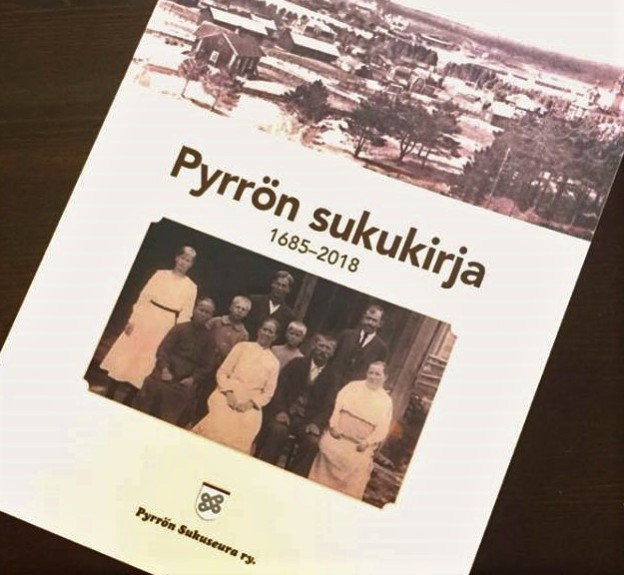 The Pyrrö family has been studied for over 20 years, starting from Toivo Pyrrö, b. 1906. At the time, we knew of his father Juho (b. 1872, d. 1935), and his wife Anna lived until 1954. There was very little information about older matters, and the family history research was just beginning.

After the founding of the family association in 2010, in addition to our own research, we have used a family history researcher, who was able to trace back to 1685 to Niilo Pyrrö in Ruskeala, Kontiolahti. In 2015 we incorporated DNA research in the study of the family ancestry, and we still ended up at Niilo Pyrrö when the results of the DNA research arrived.

In 2020 we contacted Ari Kolehmainen, MA, an expert in DNA and documentary study, and commissioned the study of the Pyrrö family. The study provided us with plenty of new information about our ancestors. The most distant ancestor, Pekka Pyrrö, b. 1640-1645, was found from Soanlahti, Ruskeala.

Our known family grew to 13 generations. 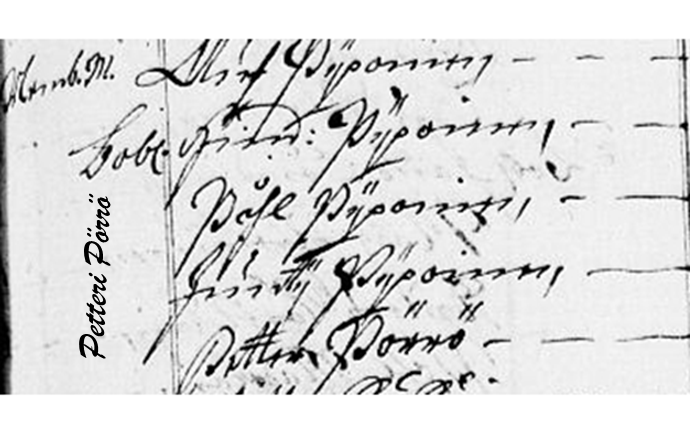 The first ancestor of the Pyrrö family, Pekka Pyrrö, lived in the town of Soanlahti in Ruskeala at least as early as 1674. Unfortunately, this falls in the feoffment period of the Käkisalmi fief, which lasted from the early 1650s to the early 1680s. At the time, the feudal lords oversaw taxation and the names of taxpayers were not entered in the tax accounts. The only sources of personal data were court journals. Pekka Pyrrö appears in the court journals on a few occasions between 1674 and 1699.

Lists of taxpayers are missing between 1652 and 1680. No members of the Pyrrö family were at Soanlahti in 1651, i.e. in the last taxpayer list before the enfeoffment period. In the 1680s to 1690s, Pekka Pyrrö was a lord of the manor in the town of Soanlahti. However, he became destitute, and in 1696 he was unable to pay taxes and was reduced to mendicancy. 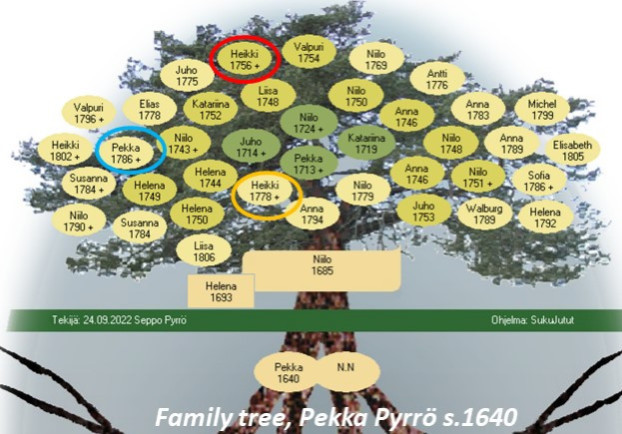 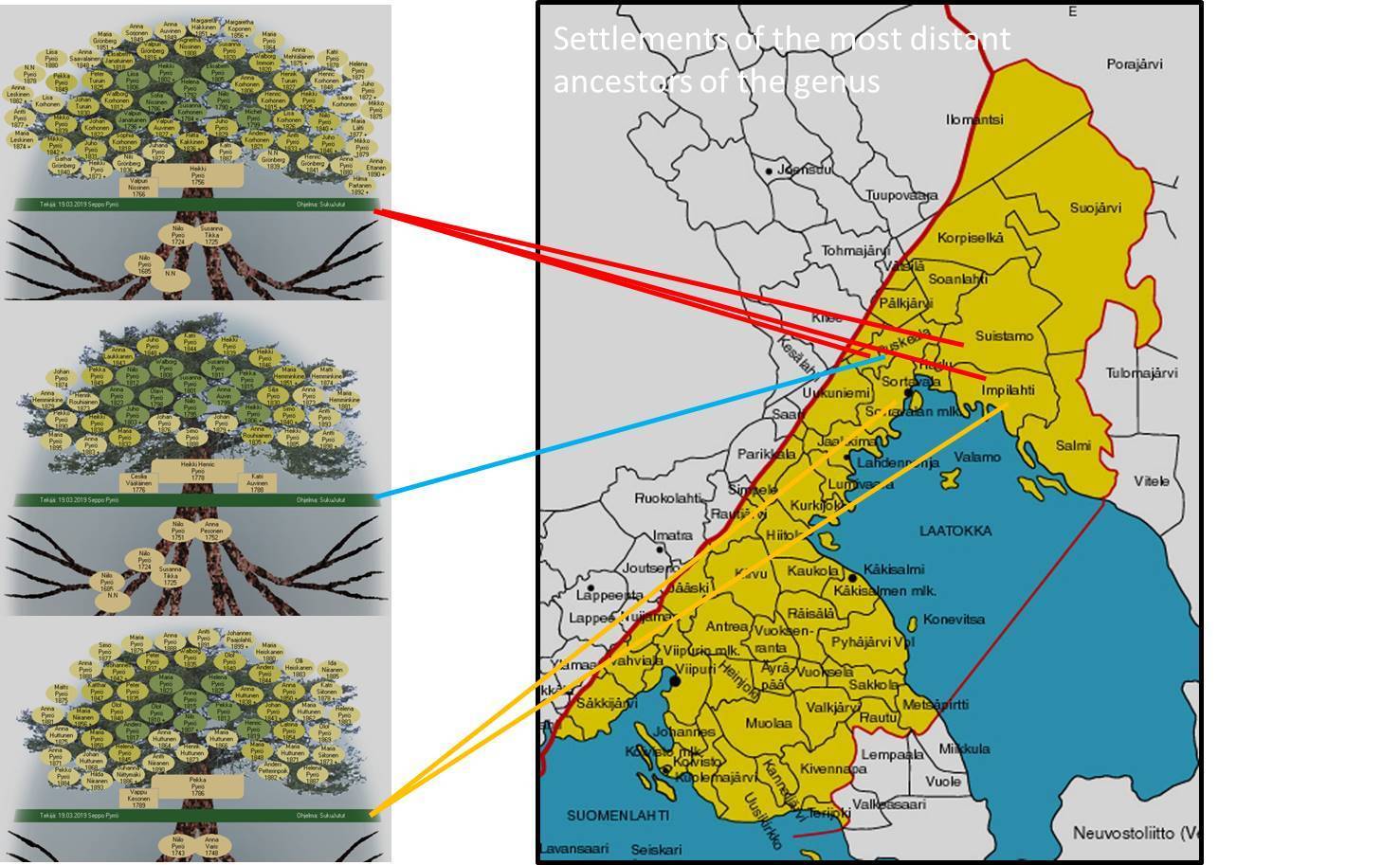 The descendants of the Pyrrö family from Ruskeala have lived in the annexed Karelia region as follows:

Heikki Pyrrö’s (1802) descendants at Kerisyrjä and Pitkäranta, Impilahti. Heikki Henrik Pyrrö’s (1778) descendants remained in Ruskeala while those of Pekka Pyrrö (1756) moved to the Sortavala region. When the Winter War began, the inhabitants of the Impilahti and Ruskeala regions were transferred to the Savo region and the inhabitants of Sortavala to Central Finland. 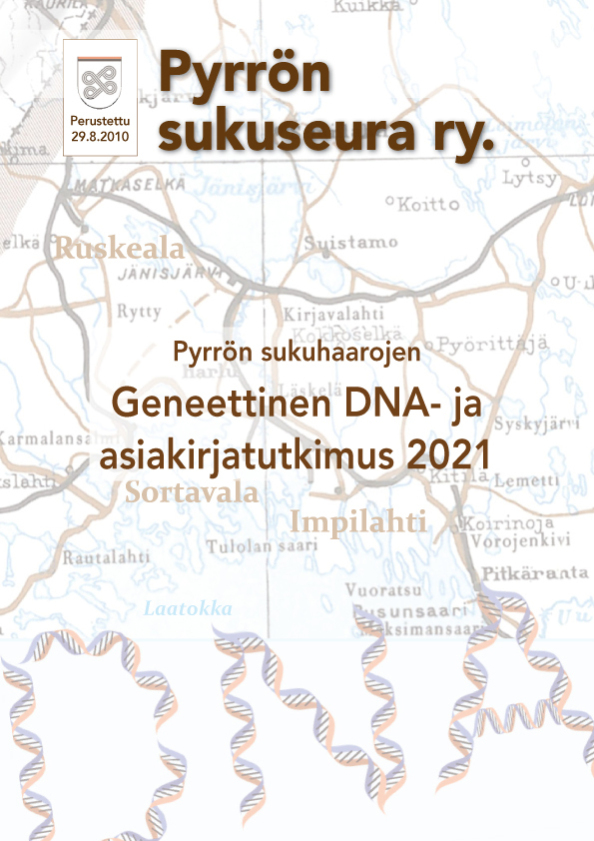 DNA study, the Pyrrö family belongs in the I1 haplogroup.

The DNA and documentary study found that the Pyrrö family belongs in the I1 haplogroup, which spread to Finland in several waves, but the main groups arrived as early as before 800 AD, i.e. before the Viking Age. The origin of the main group of Finnish I-haplo patriline belongs in a branch that arrived in Southwest Finland very early, probably over 2000 years ago. The most common sub-branch of this (I-L287) originated around 1900 years ago in either Satakunta or Pirkanmaa. 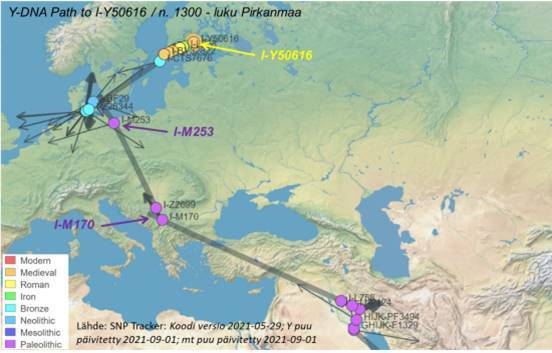 The research will be carried out by family history researcher Ari Kolehmainen, the Menneen jäljet (traces of the past) family and history service (menneenjaljet.fi). The research will study, using traditional documentary family history research and DNA research, the early stages of the I-Y50616 patriline branch and the connections of the participants’ lines. In the final report, we will approach the time when the family branches find their way to the places to which they can be traced on the basis of current documentary information. The final report will be completed at the end of 2022. 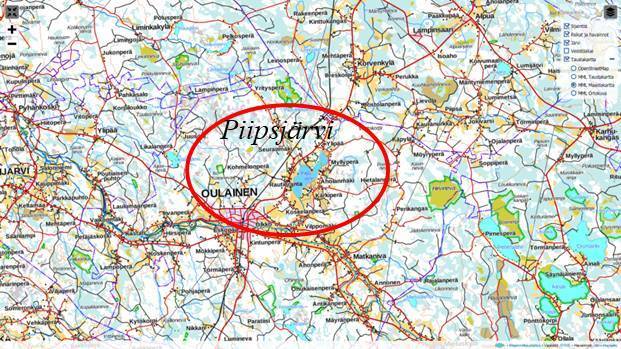 The Pyrrös of North Ostrobothnia.

The Pyrrö houses of North Ostrobothnia may also be the place of origin of the Pyrrö family. What makes this a difficult subject of study is that population registers in the 17th century only contained the master of the house, and no other occupants of houses were listed. Moreover, in Karelia, the region of origin, the taxpayer lists were missing from the early 1650s to the early 1680s.

At least in 1653, the population registers contain a mention of Niilo’s son, Heikki Niilonpoika Pyrrö, who became a master of the house from 1661 onwards. As Niilo seems to be a typical name for the Pyrrös of Oulainen, there is a good chance that, at least from the 1670s onwards, Pekka Pyrrö, who lived at Soanlahti, would be the youngest son of Niilo Ollinpoika Pyrrö (b. around 1587).

Of Pekka Pyrrö’s sons, one was Niilo (b. around 1685), from whom the Pyrrö family of Soanlahti descends. The same first names were often passed on in the family, and since Pyrrös do not show up in many places before showing up on the history pages of the Pyrrös of Soanlahti, there is a good chance that Piipsjärvi at Oulainen can be considered as a place of origin of the Pyrrö family.

Although Pekka Pyrrö does not appear in the tax rolls at Piipsjärvi, this cannot be deemed a factor ruling out that he could have been born at Piipsjärvi. Lists of taxpayers were still quite simple, and all the members of the house were not included. Furthermore, having been a younger son than Heikki, in any case Pekka would have had to leave his parents’ farm to search for livelihood elsewhere.

In the picture, the population register of 1664 and Pyrrö of Piipsjärvi, with Heikki Pyrrö (Hindrick Pörröi) as the master. Poll tax was also paid by his wife and a landless scrounger that lived in the house.

How did we end up in Karelia?

Where are our ancestors from? We are interested in knowing whether Pekka Pyrrö’s ancestors were those that came to Karelia from Savo in the 17th century. The arrivals from Savo could also have been returning migrants, as Savo was previously inhabited from Ladoga Karelia. On the other hand, the Karelian Orthodox family could also be of western origin (e.g. the I haplogroup).

The arrival probably took place in the years following the Russo-Swedish War (1656), when the emigration of Eastern Orthodox people from the province of Käkisalmi accelerated. However, although large numbers of Orthodox people remained in Soanlahti, enough farms were abandoned that there was enough available space for the Pyrrös to farm. 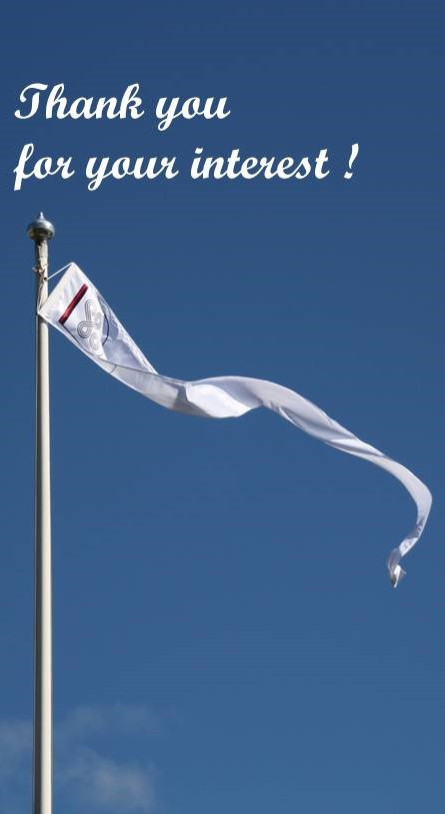 Additional information on the Pyrrö family.

The Pyrrö Family Association was founded on 29 August 2010. The purpose of the association is to unite all the branches of the family in Finland and in the annexed Karelian region, follow the phases and history of the families, treasure family traditions and promote a sense of belonging among the members of the families and those of other families connected to them.

The purpose of the Pyrrö Family Association is to unite all the branches of the family in Finland and in the annexed Karelian region, follow the phases and history of the families, treasure family traditions and promote a sense of belonging among the members of the families and those of other families connected to them.

Becoming a member of the Pyrrö Family Association is the easiest way to support the family history research and get tips and support for determining your own ancestry. You will be contributing to supporting the association’s operations and publications. Only members who have paid the membership fee receive the annually published member letters. The association promotes the family’s community spirit and sense of belonging.

People named Pyrrö can be found particularly in North Ostrobothnia, in the Pyhäjoki and Siikajoki river valleys. The name may be of the same origin as the western Piri forenames (Birger, Bygher and Börje). Pyrrö is also known as a family name at Suojärvi and Impilahti, from where several Pyrrös have emigrated since the most recent wars. 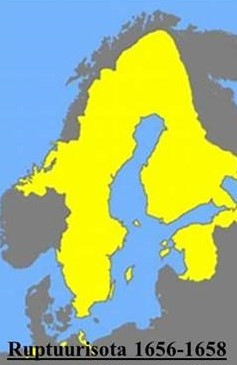